The £12 million refurbishment project marks the culmination of an exemplary working relationship between client, contractor, manufacturer and supplier. During the yearlong build, the team at Nevill Long Glasgow had to overcome a number of challenges to ensure the rennovation was a success.

Both Nevill Long and British Gypsum had to work closely to overcome logistical issues, in particular, finding a cost effective and timely method of delivering large products to the site. The Queen’s Hall is located in the small Scottish town of Dunoon and sits on the south of the Holy Loch, most visitors reach the town via ferry as it’s easier than navigating the long country roads.

Nevill Long’s Glasgow branch was first approached by the contractor, Straid Contracts during the specification stage of the project. The client had requested a number of complicated acoustic and fire performance upgrades to The Queen’s Hall auditorium, these upgrades were difficult to achieve with standard drylining products. As such, Nevill Long Glasgow began the search for specialist performance products that could attain the desired levels of performance.

During a consultation with Straid Contracts, the team at Nevill Long Glasgow recommended a number of British Gypsum’s innovative drylining solutions, including Gyproc SoundBloc and Gyproc Habito plasterboards. These specialist plasterboards have enhanced acoustic performance and are more durable, meaning the interior walls were more resistant to damage and would last.

Speaking about the decision to recommend British Gypsum products, George Allison, Branch Director at Nevill Long Glasgow commented: “We have developed a strong working relationship with British Gypsum over many years and this project reaffirmed why we consider them such a trusted partner. The company’s bespoke boards were an ideal solution for the client, who was looking to overcome some of the difficult challenges associated with the build.”

As well as the architectural and performance-related challenges, the project at the Queen’s Hall faced several logistical issues. To resolve these issues, the team at Nevill Long Glasgow and British Gypsum had to work in an effective partnership to decide how to transport the large volume of products into Dunoon. 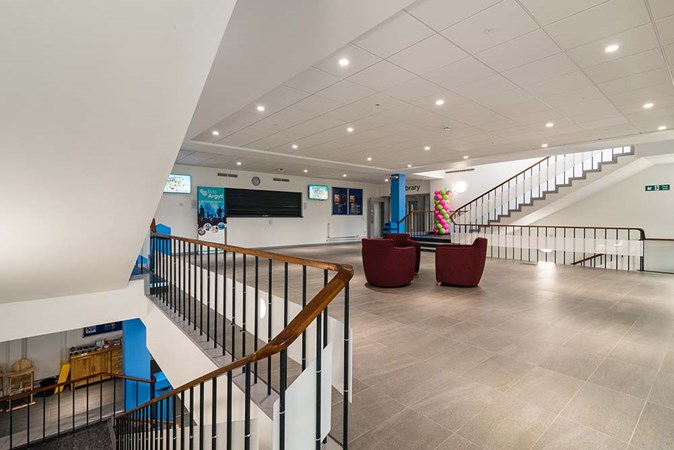 The joint Nevill Long and British Gypsum team decided that transporting the materials over land was not viable. Instead, it was elected that the goods would be delivered to the site via ferry. The team routinely loaded up the materials and shipped them across the Holy Loch, with further team members waiting to unpack and deliver to site at the other side.

George Allison continued, “once the products had been specified, we had to focus on ensuing deliveries could be made in the most cost effective manner possible. In total, more than 3,500m2 of Gyproc Habito plasterboard alone was delivered to the site via the ferry. Using the ferry was a real joint effort with British Gypsum to ensure we were able to fulfil the order with minimum fuss and provide a smooth service for the customer.”

The project at The Queen’s Hall is helping to transform Dunoon, making it a more appealing destination for locals and tourists alike. The redevelopment of this historic building has helped to breathe new life back into the town and with high-quality products installed throughout, it will live on for generations to come.

Major Regeneration at the Heart of Barnsley Town Centre

We were delighted to supply Heraklith to the regeneration project of Barnsley Town Centre....

Back to School for Knauf Windliner

Ceiling’s the deal at Cardiff Capital Quarter No4

Armstrong’s Dune eVo ceiling tiles, supplied by our Nevill Long Cardiff branch, were specified on the build of the new Capital Quarter No4 development...

Our Fareham branch have been involved with two spectacular marine projects over the past few years, providing technical knowledge in this niche market...

The concrete water tower at the bottom of Peter Stanworth’s garden was in a sorry state at the start of last year....